WHAT PITTSBURGH PENGUINS NEED TO DO IN THE OFFSEASON

The Pittsburgh Penguins have a tough offseason upcoming because they 6 major UFAs and 2 RFAs to resign and they only have about $29 million to do so. To make things tougher for the Penguins they don't have any of players in the system that can replace those players. Here is what I would do if I were GM of the Pittsburgh Penguins. 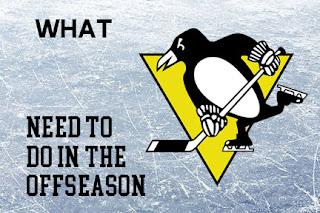 This is a win-win trade for both teams; Minnesota gets a top-line center in Evgeni Malkin to pair with Kirill Kaprizov, as well as Kasperi Kapanen to replace Kevin Fiala, while the Penguins get Kevin Fiala, a top 6 winger, Fredrick Gaudreau, an underrated center, and a 1st round pick.

Montreal gets Kris Letang to be their top pair defenseman, which would be a huge blow for Pittsburgh but at the same time they did get some nice pieces in Ryan Poehling, top prospects Kaiden Guhle and Joshua Roy, as well as a 1st and 2nd round pick.

Jason Zucker, Brian Dumoulin are traded to the Vancouver Canucks for Tanner Pearson, 3rd round pick '22.

This is mostly a cap dump for the Penguins, which saves the Penguins 6.35 million in cap space. In addition, this trade addresses the positional needs of both teams, the Penguins need goal-scoring, while the Canucks need better defense.

The Penguins improved their dreadful prospect pool a bit with the additions of three former USNTDP players: Jimmy Snuggerud, Rugter McGroarty, and Seamus Casey. They also added Topi Ronni and Marcel Marcel, who are big forwards, who could play a depth role on the team down the road, and two defensemen in Elmeri Laakso and Elias Pettersson.

All Non-Roster RFAs are re-signed

The Pittsburgh Penguins can still remain a competitive team in the Eastern Conference with the moves they made here, and didn't have to overpay 35 year old veterans.