What Detroit Red Wings Need to do in the Offseason 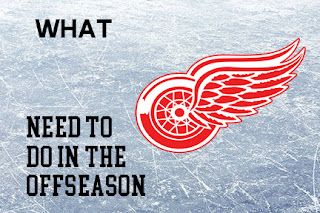 This is a win-win trade for both teams because the Coyotes get a potential top 6 winger, while the Red Wings get Colorado's 1st round pick from this year's draft.

Robby Fabbri and Jordan Oesterle are traded to the Toronto Maple Leafs for Ilya Mikheyev and Ilya Lyubushkin. If Neither of these players re-signs with Detroit, they get a 2023 3rd-round pick. Detroit retains 1.5 million of Robby Fabbri's Contract for the duration of it.

This is basically a cap dump for the Red Wings, and for the Maple Leafs, they get two players to help the roster for two pending UFAs.

The Red Wings also trade Dan DeKeyser to the Anaheim Ducks for Jacob Larsson and a 2022 6th round pick. If DeKeyser re-signs with Anaheim, Detroit gets a conditional 4th round pick '23.

The Red Wings get something for a pending UFA in Dan DeKeyser, so they don't lose him for nothing.

Mattias Samuelsson will give the Red Wings a solid defensive defenseman to pair alongside Moritz Seider, while the Sabres add two solid depth players and a 3rd round pick.

Detroit Red Wings add 7 forwards, 5 defensemen, and 1 goalie with the 13 picks that they have in the 2022 draft.

This is what the Lineup looks like at the beginning of next season:

The Detroit Red Wings have put together a solid team that might still miss the playoffs but are headed in the right direction.