HOW PHILADELPHIA FLYERS CAN BECOME A DYNASTY AGAIN

The Philadelphia Flyers won back-to-back Stanley Cups in the 1970s, but since then they have yet to win the Stanley Cup again. The Flyers have some great players on the team, but I think they might need to make some adjustments to win it all. 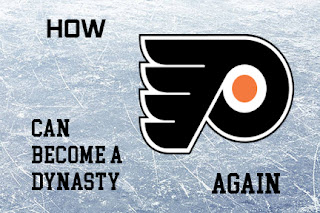 At the trade deadline, Philadelphia Flyers make one major trade:

The Flyers acquire Ryan Ellis, a top-pair defenseman to pair with Ivan Provorov.

With the addition of Ryan Ellis, the Philadelphia Flyers make the playoffs but get eliminated in the 2nd round of the playoffs.

Before the expansion draft, the Philadelphia Flyers trade Jakub Voracek to the Detroit Red Wings for a 2021 2nd round pick (from NYR), 2022 2nd round pick.

The Flyers free up more than 8 million in cap space by unloading Voracek's contract, and at the same time add two 2nd round picks.

Philadelphia Flyers lose Scott Laughton to the Seattle Kraken in the Expansion Draft.

The Flyers get a veteran defenseman Josh Manson, Sam Steel, and a 3rd round pick in exchange for JVR, who just had a tremendous year.

The Flyers also trade Shayne Gostisbehere to the LA Kings for a 2021 2nd round pick.

The Flyers around retooling their defense, so they ship Gostisbehere to LA for a 2nd round pick.

The Philadelphia Flyers draft 5 quality prospects that could be impact players down the road.

The Philadelphia Flyers take a step back in the 2021-22 season, and miss the playoffs; they end up with the 14th pick in the draft.

Philadelphia Flyers trade Claude Giroux to the LA Kings for Adrian Kempe, Gabriel Vilardi, 2022 2nd round pick. If Giroux re-signs with the Kings, the Flyers get a 1st round pick in 2023.

The Flyers part ways with Captain Claude Giroux, so they can build the team around Sean Couturier.

At the 2022 Draft, Philadelphia Flyers trade picks 14, 37 to the Nashville Predators for pick 8

The Philadelphia Flyers draft three prospects who could have a big impact on the team in the future.

The Philadelphia Flyers make it Stanley Cup Finals before being beat by the Colorado Avalanche.

After the season, one major trade is made:

The Flyers get Jesperi Kotkaniemi and Josh Brook, two young players, who aren't getting used properly in Montreal.

Since Claude Giroux re-signed with the LA Kings, the Flyers get their first-round pick; the Kings have the 10th pick in the draft.

The Flyers draft Hunter Brzutewicz, a solid defensive prospect that should help the team down the line.

The Philadelphia Flyers win the 2024 Stanley Cup after defeating the Colorado Avalanche in 6 games.

By the 2024-25 season, the Philadelphia Flyers have assembled a powerhouse team.

The Philadelphia Flyers have won a Stanley Cup and have the potential to be a dynasty.

HOW NEW YORK ISLANDERS CAN BECOME A DYNASTY

It has been 38 years since the New York Islanders last won a Stanley Cup, and although they have been doing well in the playoffs in recent years, the odds of them winning a Stanley cup are pretty thin, especially playing in arguably the toughest division in the NHL.

If the New York Islanders want to win the Stanley Cup, they will have to make some changes to the team. 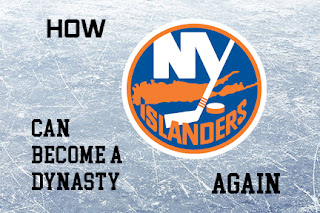 At the trade Deadline, the Islanders make one major trade:

The Islanders acquire David Savard, a reliable defensive-defenseman, who fits in perfectly with the Islanders.

With the addition of David Savard, the Islanders manage to make it to the Conference Finals, where they are eliminated by the Tampa Bay Lightning.

This trade gives the Islanders some cap flexibility, and at the same time gives them the players they need to improve their team.

Brock Nelson is traded to the Columbus Blue Jackets for 1st round pick '21.

The Islanders get a first-round pick for Brock Nelson.

In the 2021-22 season, the New York Islanders make it to the Stanley Cup Finals but lose in 6 games.

The Islanders get Jake Virtanen, a solid young power forward and a 1st round pick for Anders Lee.

The New York Islanders end up winning the 2023 Stanley Cup in 6 games over the Colorado Avalanche.

After the season, one trade is made:

The Islanders trade Varlamov for Vanecek and swap 2nd round picks.

Oskar Sundqvist to a 3yrs/2.5M per

By the 2023-24 Season, the New York Islanders have assembled a powerhouse team:

The New York Islanders built a young team that looks like could be the next dynasty in the league.

HOW TORONTO MAPLE LEAFS CAN BECOME A DYNASTY AGAIN

It has been 54 years since the Toronto Maple Leafs last won a Stanley Cup, but they certainly do have the personnel on hand to win multiple Stanley Cups if they make some adjustments to the team. 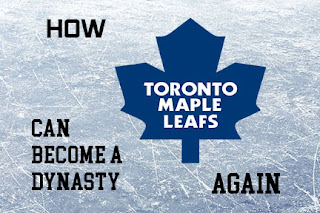 At the Trade Deadline, one major trade is made:

The Maple Leafs get Brassard and Cagguila to bolster their depth for a deep playoff run.

The Toronto Maple Leafs end up losing in the Conference Finals to the Tampa Bay Lightning in 6 games.

Before the 2021 draft, two major trades are made:

The Anaheim Ducks acquire Josh Manson and Max Jones, the two players will provide some physicality and toughness to the team.

The Toronto Maple Leafs win their division in the 2021-22 season and cruise to their first Stanley Cup in 66 years.

The Maple Leafs get Owen Tippett and Alexander Wennberg, and a 1st  for William Nylander.

The Maple Leafs get a pick back for Josh Manson, who wasn't going to get re-signed due to Toronto's cap situation.

Toronto Maple Leafs draft Charlie Leddy and Jonathan Lekkerimaki, two prospects who could be impact players a few years down the line.

The Toronto Maple Leafs win back-to-back Stanley Cups for the first time since the 60s.

After the 2022-23 season, the Toronto Maple Leafs make one trade:

The Maple Leafs get Alexandre Texier and Andrew Peeke to bolster their depth on the team.

By the 2023-24 season, the Maple Leafs have won two Stanley cups and are on the cusp of winning another.

The Toronto Maple Leafs have won back-to-back Stanley Cups and have a chance to three-peat if everything goes right in the 2023-24 season.

HOW EDMONTON OILERS CAN BECOME A DYNASTY AGAIN

It has been 30 years since the Oilers won their last Stanley Cup but with two of the best players in the world to build around, it is certainly possible to restore the glory days. 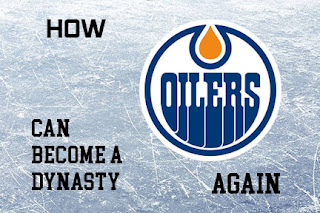 At the trade deadline, two trades are made:

The Oilers add Dylan Strome and Philipp Kurashev to add some offensive punch to the lineup.

The Edmonton Oilers make it to the 2020-21 season but lose in the 2nd round of the playoffs.

Edmonton Oilers lose Ethan Bear to the Seattle Kraken in the expansion draft.

Before the 2021 draft, the Oilers make one trade:

The Oilers get Ryan Hartman and a 2021 1st round pick for RNH and Alex Chiasson, two UFAs that they might not re-sign.

In the 2021-22 Season, the Edmonton Oilers make it to the Stanley Cup Finals before being eliminated in 6 games.

Before the 2022 draft, the Oilers make one major trade:

The Oilers get Jesperi Kotkaniemi, a talented young center, who is stuck playing behind Suzuki and Danault in Montreal.

Edmonton Oilers draft Gleb Trikozov, a talented Russian prospect, who can help the team in two or three years.

The Edmonton Oilers win the Presidents' Trophy and the Stanley Cup in the 2022-23 season.

Daniil Tarasov is acquired from the Edmonton Oilers for a 2024 3rd round pick.

The Oilers add Daniil Tarasov, a Russian goalie, who is stuck in the pipeline in Columbus.

Edmonton Oilers sign Justin Holl to a 3 yr deal worth 2.5 million per season.

By the 2023-24 season, Edmonton has already won a Stanley Cup and is on the cusp of another.

The Edmonton Oilers have assembled a talented young team that has the potential to be the next dynasty in the league.

Why Dallas Stars Should Consider Rebuilding

The Dallas Stars are an aging team, and with the injuries to Seguin and Bishop, the Stars should consider rebuilding. The Stars would benefit in the long run if they were to move some of the older veteran players for some picks and prospects. 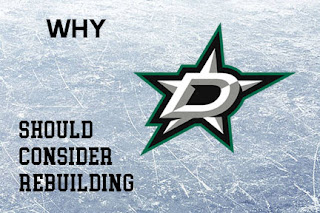 At the trade deadline, the Dallas Stars make a few trades:

Dallas Stars trade Ben Bishop to the St.Louis Blues for Jordan Kyrou, and a 2022 2nd round pick.

Ben Bishop is a great goalie when healthy but with Khudobin and Oettinger on board, the Stars no longer need Bishop.

The Red Wings acquire a marquee player to bolster their lineup for Vladislav Namestnikov and two 2nd round picks.

The Dallas Stars finish the 2020-21 season with the 12th worst record in the league but end up with the 3rd pick in the draft.

Before the 2021 draft, the Dallas Stars make one major trade:

The Panthers get Joe Pavelski, a star forward, and a solid defenseman in Jamie Oleksiak to help bolster their roster.

At the trade deadline, the Dallas Stars make one major trade:

The Flyers get a top-pair puck-moving defenseman to pair with Ivan Provorov.

The Dallas Stars finish the 2021-22 season with the 3rd worst record in the league and end up with the 2nd pick in the draft.

The Dallas Stars draft Matthew Savoie and Cruz Lucius, two blue-chip prospects that should be a huge part of their future.

The Dallas Stars finish the 2022-23 season with a much better record; they end up with the 13th pick in the draft.

Before the 2023 Draft, the Dallas Stars trade Tyler Seguin to the San Jose Sharks for Timo Meier, and a 2023 1st round pick.

The Sharks get Tyler Seguin, a bonafide 1st line Center, while the Stars get Timo Meier and a 1st round pick.

Dallas Stars draft Arttu Karki and Connor Levis, two terrific young prospects that should help the team down the road.

By the 2023-24 season, the Dallas Stars have put together a contending team

The Dallas Stars have now built a dangerous team that looks like they could be contenders for the next few years.