How Florida Panthers can win their First Stanley Cup 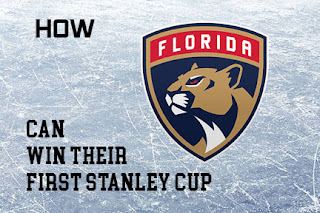 At the expansion draft, one trade is made:

Florida Panthers trade Keith Yandle to the Seattle Kraken for a 2021 2nd round pick, 2021 3rd rd pick. If the Kraken make the playoffs, the Panthers get an additional 2022 2nd rd pick.

Keith Yandle would have to waive his no-move clause, but I think he would be he would get more ice time with the Seattle Kraken, who could use a veteran defenseman like Yandle.

Florida Panthers lose Chris Driedger to the Seattle Kraken in the expansion draft.

Florida Panthers trade Anton Stralman to the Columbus Blue Jackets for a 2021 4th round pick.

The Panthers unload Stralman's contract, while the Blue Jackets get a veteran defenseman that fits into Columbus' system.

The Panthers add Jamie Oleksiak and Jason Dickinson, two solid players who can be stop-gap solutions until their prospects are NHL ready.

Florida Panthers draft three very good prospects in Zachary L'Heureux, Logan Mailloux, and Fyodor Svechkov; all three prospects should play a key role on the team down the road.

Florida Panthers sign Adam Larsson to a 6 yr deal worth 4 million per season.

At the 2022 Trade deadline, one major trade is made:

The Florida Panthers make it to the 2nd round of the playoffs in the 2021-22 season but lose in 6 games to the Carolina Hurricanes.

Florida Panthers get Mario Ferraro, a physical defenseman that will round out the defense, and a 2022 3rd round pick in exchange for Frank Vatrano and Markus Nutivaara.

Florida Panthers sign Nic Paul to a 3 yr deal worth 2.5 million per season.

The Florida Panthers win the Presidents' Trophy in the 2022-23 season, and make it to the Conference Finals, before losing to the New York Rangers in 6 games.

Before the 2023 draft, two major trades are made:

The Red Wings get two savy veteran players in Hornqvist and Gudas, while the Panthers get Michael Rasmussen, a solid young power forward and a draft pick.

The Rangers get more depth and versatility in the lineup with the Additions of Verhaeghe and Wennberg, while the Panthers get Vitaly Kravtsov, a very skilled right-winger to play with Barkov and Huberdeau.

The Florida Panthers draft Mazden Leslie, a high-end offensive defenseman, that could be useful down the line.

The Florida Panthers win the Stanley Cup in 6 games over the Colorado Avalanche.

By the 2024-25 season, the Florida Panthers have already won a Stanley Cup, and are looking to win back-to-back Stanley Cups.

The Florida Panthers have put together a fantastic young team that has the potential to win a few more Stanley cups.

HOW OTTAWA SENATORS CAN WIN THEIR FIRST STANLEY CUP 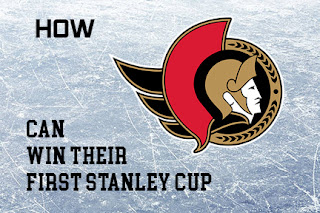 Before the Expansion Draft, the Ottawa Senators make one major trade.

Ottawa Senators trade Evgenii Dadonov to the Seattle Kraken for a 2021 3rd round pick.

Evgenii Dadonov hasn't quite fit in with the Ottawa Senators, perhaps going to Seattle might revive his career a bit.

Ottawa Senators lose Derek Stepan to the Seattle Kraken in the expansion draft.

The Predators improve their depth on offense with the additions of Anisimov and Dzingel, while the Senators add some decent role players in Cousins and Grimaldi.

The Ottawa Senators finished the 2020-21 season with the 4th worst record in the league, but end up with the 5th pick in the draft.

The Senators also trade picks 38 to the New Jersey Devils for picks 52, 71.

The Senators get Sam Reinhart, a player who was once highly touted but has been a bit of a disappointment for the Sabres; he will get a much-needed change in scenery.

The Ottawa Senators have a slightly better record in the 2021-22 season, and end up with the 6th pick in the draft.

Ottawa wins the draft lottery and ends up landing the 1st overall pick in the 2022 draft.

The Senators strike gold in the 2022 draft, landing Shane Wright and Ivan Miroshichenko, as well as Marco Kasper, Simon Forsmark, and Ludwig Persson.

After the 2022 draft, the Ottawa Senators make a major trade:

This is a good trade for both teams because the Senators get a goal Patrik Laine and Boone Jenner, while the Blue Jackets get Chris Tierney, Erik Brannstrom, and Alex Formenton, and a 1st round pick.

The Ottawa Senators just miss out on the playoffs in the 2022-23 season and end up with the 14th pick in the draft.

This trade is a straight cap dump to get rid of Nikita Zaitsev's contract.

The Ottawa Senators draft Ondrej Molnar, a talented goal-scoring winger out of Slovakia.

The Senators get Spencer Knight from the Florida Panthers to be their goalie of the future.

The Ottawa Senators cruise to a presidents' trophy in the 2023-24 season, and their first-ever Stanley Cup.

By the 2024-25 season, the Ottawa Senators have put together a frightening team.

The Ottawa Senators have now built a young and dominant team that looks like the NHL's next dynasty.

HOW LA KINGS CAN BECOME A DYNASTY

The LA Kings are a few years removed from their dynasty years, but they are assembling the pieces to become a dynasty once again. This is how I would transform the LA Kings into a dynasty again. 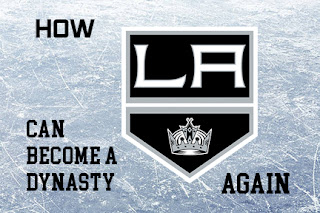 Before the Expansion draft, the LA Kings make two trades

LA Kings trade Jonathan Quick to the Detroit Red Wings for a 2022 4th round pick.

This trade gives the Red Wings a solid goalie to tandem with Thomas Greiss, while Kings get to unload Jonathan Quick's contract.

This is a good trade for both teams because it gives the Kraken a good veteran presence in the locker room, while the Kings get to dump Dustin Brown's contract.

LA Kings lose Matt Roy to the Seattle Kraken in the Expansion draft.

Before the 2021 draft, the LA Kings make one major trade.

Laine is not a good fit for Columbus; perhaps a trade to LA will allow him to fulfill his potential.

LA Kings draft 5 very good prospects that could be huge contributors to the team down the road.

LA Kings re-sign Patrik Laine to a 4 yr deal worth 7.5 million per season.

LA Kings sign Linus Ullmark to a 5 yr deal worth 5.2 million per season.

The Kings trade Olli Maatta and Lias Anderson for some depth players and a 2nd round pick.

The LA Kings finish the 2021-22 season with the 5th worst record in the league but slide to the 7th pick in the draft as two teams jump them in the lottery.

The Senators get a bonafide number 1 center in Anze Kopitar, while the Kings get Josh Norris, a good young center, and two first-round picks.

LA Kings draft 2 blue-chip prospects in Jack Hughes and Seamus Casey, both should be major contributors down the road.

The LA Kings barely miss the playoffs in the 2022-23 season; they end up with the 14th pick in the draft.

The Leafs get another top-notch defenseman in Drew Doughty, but it comes at the cost of William Nylander, Rodion Amirov, and Timothy Liljegren.

The Kings add Sam Girard and Shane Bowers, two promising young players that will be a crucial part of their young core.

The Kings draft Emil Jarventie and Mikhail Gulyayev, two very good prospects that will be good two years down the line.

The LA Kings make the playoffs in the 2023-24 season, but get eliminated in the 2nd round of the playoffs.

LA Kings re-sign Carson Lambos to a 3 yr deal worth 3.5 million per season, Shane Bowers to a 2 yr deal.

By the 2024-25 season, the LA Kings have put together a dominant team.

The LA Kings look like a young exciting that has the potential to be the next dynasty in the league.

HOW COLORADO AVALANCHE CAN BECOME A DYNASTY AGAIN 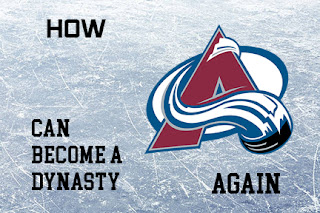 At the trade deadline, two major trade is made:

The Avalanche add Sam Reinhart and Colin Miller to bolster their depth for an extensive playoff run.

The Avalanche add some key role players in Filppula and Glendening for a playoff run.

The Colorado Avalanche ends up winning the Stanley cup in 6 games over the Tampa Bay Lightning.

Before the expansion draft, the Avalanche trade Erik Johnson, 2023 1st round pick to the Ottawa Senators for Vitaly Abramov, 3rd rd pick '2023.

This is a win-win trade for both the Avs and Johnson because the Avs get to move on from Erik Johnson, while the Johnson will get to play on the 1st pair in Ottawa.

The Colorado Avalanche lose Tyson Jost to the Seattle Kraken in the expansion draft.

Before the 2021 Draft, a few major trades are made:

Colorado Avalanche trade Philipp Grubauer to the Toronto Maple Leafs for Timothy Liljegren, 2021 2nd round pick. If the Maple Leafs reach the Conference Finals, the Avalanche get a 1st round pick in 2022 or 2023.

The Avalanche trade Philipp Grubauer to the Leafs because his price tag will be too high.

The Avalanche trade the rights of Brandon Saad and Matt Calvert for Miles Wood and a 3rd round pick.

The Colorado Avalanche adds some nice prospects that could be solid players in a few years.

The Colorado Avalanche cruise through the regular season on route to the Presidents' Trophy, and end up winning the Stanley Cup again; this time they defeat the Carolina Hurricanes in 6 Games.

Before the 2022 Draft, One major trade is made:

The Avalanche adds two terrific young players in Alex Turcotte and Tobias Bjornfot; this move makes a team that has already won back-to-back cups even stronger.

The Avalanche adds a solid young prospect in Kravtsov and a solid backup in Alexandar Georgiev; this gives the Avs more options to work within the lineup.

The Colorado Avalanche three-peat, as they win 3 straight Stanley Cups, with their victory over the Florida Panthers.

The Blackhawks desperately need a left defenseman, so they are more than willing to pay a premium price to get a play like Sam Girard.

Joonas Donskoi, Devon Toews is traded to the Boston Bruins for Connor Clifton, 2024 2nd round pick.

The Bruins deep more depth on Deft D and at Right-wing, while the Avs need to clear some cap space, so this is an ideal trade.

The Avalanche draft Emil Jarventie, a highly-skilled forward, could help the team down the road.

By the 2023-24 Season, the Colorado Avalanche is a dynasty and is on track to win more.

The Colorado Avalanche have now become the first team in the salary cap era to become a dynasty and by the looks of their roster, they could have a stranglehold on the NHL for the next 5 years.