WHAT IF FLORIDA PANTHERS RELOCATED 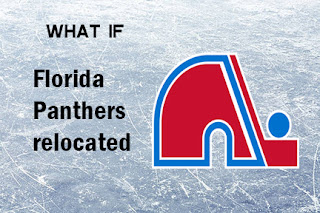 To prepare the Panthers for their move up north, they need to make the team look better on paper.

Before the 2021 draft, the Panthers make two trade:

The Panthers get Vladimir Tarasenko, a superstar sniper, while the Blues get Anthony Duclair, a top 6 winger as well as Owen Tippett and Henrik Borgstrom, two top prospects, and a 1st round pick.

The Panthers get Nino Niederreiter, a solid top 6 forward, and Brock McGinn, a solid top 9 forward; while the Hurricanes get Frank Vatrano, Vinnie Hinostroza, two solid role players, Anton Stralman, a valuable veteran Defenseman, and a 2nd round pick.

The Florida Panthers will be relocated to Quebec before the 2021-22 season; causing the divisions to get shuffled around again.

After relocating to Quebec, they are renamed the Quebec Nordiques and will join the North Division, along with all the other Canadian teams.

The Quebec Nordiques make the playoffs in the 2021-22 season, only to get eliminated in the 2nd round of the playoffs.

Before the 2022 draft, the Nordiques make two trades:

The Nordiques get Vitaly Kravtsov, a stellar young winger and a 3rd round pick for Alexander Wennberg and Brett Connolly, two solid role players.

The Nordiques also trade Keith Yandle to the Detroit Red Wings for Dennis Cholowski and a 2022 2nd round pick.

The Red Wings get Keith Yandle, a steller offensive defenseman for Dennis Cholowski, a good young defenseman, and a 2nd round pick.

The Quebec Nordiques draft Issac Howard and Kasper Kulonummi, two very good prospects to help the team in the future.

The Quebec Nordiques make it to the Conference finals in the 2022-23 season, but get elimited in 6 games.

After the 2022-23 season, the Quebec Nordiques make two major trade:

The Nordiques get a franchise defenseman in Bowen Byram and a great 3rd line center in Nazem Kadri for Jonathan Huberdeau, a top prospect in Grigori Denisenko, and a 1st round pick.

Patric Hornqvist is traded to the Nashville Predators for the 2023 5th round pick.

Since Hornqvist is a free agent, the Nordiques should try to get something in return for him.

Quebec Nordiques sign Jason Zucker to a 5 yr deal worth 5.5 million per season

By the 2023-24 season, the Quebec Nordiques have built a contending team.

The Quebec Nordiques cruise through the regular season in the 2023-24 season on route to their first-ever Stanley Cup. Three seasons after relocating to Quebec, the team not only is a legit contender but has already won a Stanley Cup.

HOW TO IMPROVE MONTREAL CANADIENS 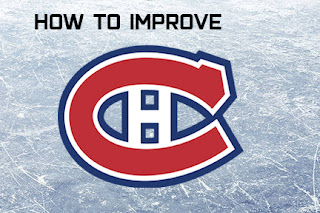 The Canadiens get Tomas Hertl, a great second-line center, and Marcus Sorensen, while the Sharks add Phillip Danault, a great two-way center, Joel Armia, and Victor Mete, two good depth players and a 2nd round pick.

The Canadiens also trade Paul Byron, Artturi Lehkonen to the Columbus Blue Jackets for Emil Benstrom, Eric Robinson, and a 2021 3rd round pick.

The Blue Jackets get Paul Byron and Artturi Lehkonen, two top 9 forwards, while the Canadiens get Emil Benstrom and Eric Robinson, two solid young players, and a 3rd round pick.

The Montreal Canadiens make it to the 2nd round of the playoffs in the 2020-21 season before being eliminated by the Tampa Bay Lightning.

The Montreal Canadiens lose Joel Edmundson to the Seattle Kraken in the Expansion draft.

The Montreal Canadiens draft Artem Grushnikov, a great prospect defenseman, who can help bolster their blueline.

In the 2021-22 season, the Montreal Canadiens were once again eliminated in the second round.

Before the 2022 draft, the Montreal Canadiens make two trades:

The acquisition of Jonathan Drouin allows the Avalanche to pair the former Halifax Moosehead linemates together, while Montreal gets a top prospect in Shane Bowers, Devon Toews, and a 1st round pick.

Since Chiarot is a UFA and the Canadiens have Kaiden Guhle and Artem Grushnikov in the pipelines waiting, the Canadiens don't need Chiarot anymore.

The Montreal Canadiens draft Noah Greuter and Gleb Trikozov, two highly skilled forwards, who could be a key part of the Canadiens future.

The Montreal Canadiens finally breakthrough in the 2022-23 season and make it to the Stanley Cup Finals but lose to the Colorado Avalanche.

Shea Weber retires after the 2022-23 season; he still had 3 years left on his contract but had to retire due to injuries. To make more cap space, the Canadiens move Weber on LTIR.

By the 2023-24 season, the Montreal Canadiens have built a Stanley Cup contender.

The Montreal Canadiens can be the next dynasty in the NHL because of the improvements they made to their lineup.

HOW TO IMPROVE VANCOUVER CANUCKS 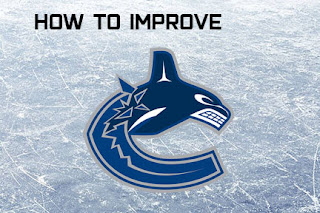 The main purpose of this trade from Vancouver's perspective is to get rid of Michael Ferland and Sven Baertschi; from Detroit's point of view, this is low-risk trade, where they add some nice players for some draft picks.

After creating more than 5 million in cap space, the Vancouver Canucks add some players in Free Agency:

At the expansion draft, the Vancouver Canucks trade Loui Eriksson, Tanner Pearson, 1st round pick '21 to the Seattle Kraken for Zach Hyman, 3rd round pick '21.

This is an excellent trade for the Vancouver Canucks, who get rid of Loui Eriksson's contract; adding Pearson and a 1st round pick sweetens the deal significantly. Getting Zach Hyman, who the Seattle Kraken was looking to trade, and a 3rd round pick is a bonus.

Before the 2021 draft, Vancouver Cancuks trade Alex Edler to the Boston Bruins for a 1st round pick '21.

This is the perfect deal for both teams because the Bruins get a veteran top 4 LD, while the Cancuks a 1st round pick.

The Vancouver Canucks bolster their depth on defense in the system by adding Corson Ceulemans and Cameron Whynot, two great prospect defensemen.

All RFAs are re-signed by the Vancouver Canucks.

In Free Agency, the Vancouver Canucks sign the following players:

Due to the loss of Holtby, Edler, Brassard, and Perry, the Vancouver Canucks drop in the Standings; they miss the playoffs; they end up with the 13th pick in the draft.

Before the 2022 draft, Vancouver Canucks trade Tyler Myers to the Los Angeles Kings for Adrian Kempe, 2nd round pick '22.

The Kings add Tyler Myers, a top 4 defenseman that will really bolster their defense, while the Canucks get Adrian Kempe, a top 9 forward and a 2nd round pick.

At the 2022 draft, the Vancouver Canucks trade picks 13, 45 to the Chicago Blackhawks for pick 9.

The Vancouver Canucks add a great shutdown defenseman to pair alongside Quinn Hughes on their top pair.

All RFAs are re-signed by the Vancouver Canucks.

The Vancouver Canucks are a powerhouse in the 2022-23 season; they cruise through the Stanley Cup playoffs on route to their first Stanley Cup in franchise history.

By the 2023-24 season, the Vancouver Canucks have won a Stanley Cup and could be on the verge of winning another.

This team is flat out scary and has the potential to win back-to-back Stanley Cups.

How to Improve Winnipeg Jets

The Winnipeg Jets have a solid team, but if they want to make the playoffs in the newly formed All-Canadian Division, they need to improve their roster. The Jets should focus on improving their defense, their offensive depth, and prospect pool. 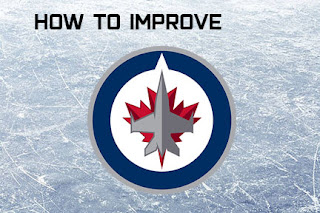 This trade is beneficial for both sides because the Habs get Patrik Laine, a stud goal scorer, while the Jets get Jonathan Drouin, Philip Danault, two Mete, and Lehkonen, solid role players, and a 1st round pick.

Winnipeg also trades Adam Lowry, Nathan Beaulieu, and a 2021 2nd round pick to the Buffalo Sabres for Brandon Montour.

This is a good trade for both teams because the Jets get Brandon Montour, a stable two-way defenseman, while the Sabres get Adam Lowry, a valuable role player, Nathan Beaulieu,

and a 2nd round pick.

At the trade deadline, Paul Stastny gets traded to the Florida Panthers for 2nd round pick '21.

Stastny is a Free Agent after the 2021 season, so it would be smart to move him at the deadline rather than lose him for nothing in free agency.

Despite the changes to the roster, the Winnipeg Jets still end up missing the playoffs; they end up with the 12th pick in the draft.

The Winnipeg Jets add Mason McTavish, a blue-chip prospect, Corson Ceulemans, a great two-way defenseman, and Wyatt Johnston, a skilled center; these prospects should be key pieces of the team down the road.

After the draft, Nikolaj Ehlers, Neal Pionk are traded to the LA Kings for Akil Thomas and a 2022 1st round pick.

The LA Kings get Nikolaj Ehlers, a proven top 6 winger, and Neal Pionk, a top 4 defenseman; the Jets get Akil Thomas, a great prospect forward, and a 1st round pick.

All RFAs are re-signed by the Winnipeg Jets.

The Winnipeg Jets miss the playoffs in the 2021-22 season; they end up with the 8th pick in the draft.

The Winnipeg Jets draft Ivan Miroshichenko and Frank Nazar, two huge pieces of their core for years to come.

The Jets draft a talented Russian defenseman that they hope will be a huge part of their D-core in the future.

All RFAs are re-signed by the Winnipeg Jets.

After the season, Blake Wheeler is traded to the Ottawa Senators for Drake Batherson, Lassi Thomson, and a 2025 1st round pick.

This is a great trade for both teams because the Sens get a great veteran leader in Blake Wheeler, while the Jets get Batherson and Lassi Thomson, two great young players and a 1st round pick.

By the 2024-25 season, the Winnipeg Jets are a powerhouse and are on the verge of becoming a dynasty.

By making a few trades, the Winnipeg Jets have successfully improved their team and turned themselves into the next dynasty.

How to Improve Columbus Blue Jackets 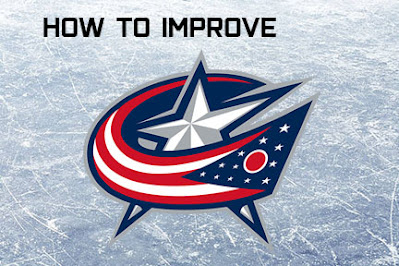 The Blue Jackets acquire two great young prospects in Brown and Abramov, as well as a 2nd round pick for David Savard.

Columbus gets Adam Larsson, a top 4 defenseman, and Zack Kassian, a top 9 forward for Nick Foligno and Mikhail Grigorenko.

The Columbus Blue Jackets miss the playoffs in the 2020-21 season; they end up with the 14th pick in the draft.

By taking on Victor Rask' contract, the Blue Jackets add an additional 1st round pick in the process;

The Blue Jackets add Fabian Lysell, Luke Hughes, and Joshua Roy, three very good prospects, who can help the team down the road.

Logan Brown, Vitaly Abramov are re-signed to 2 yr deals worth 1.5 million per season.

The Columbus Blue Jackets plummet in the standings during the 2021-22 season and finish with the 8th worst record in the league. However, Columbus gets lucky in the draft lottery and winds up with the 2nd pick in the draft.

Before the 2022 draft, the Blue Jackets make two trades:

The Calgary Flames get Cam Atkinson and Boone Jenner, two very good forwards for Dillon Dube and a 1st round picks.

The Blackhawks get their Starting goalie for the future and a top 4 defenseman while the Blue Jackets add prospects and picks.

The Columbus Blue Jackets draft Matthew Savoie and Frank Nazar, two high-end talents, who will be a massive part of their core.

The Columbus Blue Jackets make the playoffs in the 2022-23 season but get bounced in the second round of the playoffs by the Tampa Bay Lightning.

By the 2023-24 season, the Columbus Blue Jackets have built a contending team: 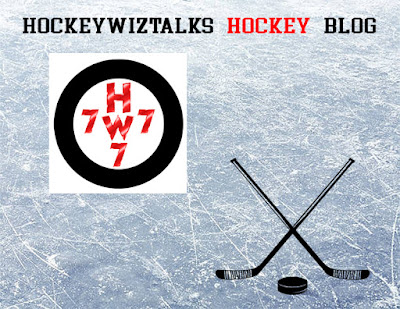 The Columbus Blue Jackets have vastly improved their roster and built a roster that can be perrenial contenders for a long time to come.