How Chicago Blackhawks can become a Dynasty Again

The Chicago Blackhawks are a team that is stuck in no-mans-land; they aren't good enough to make the playoffs yet they aren't bad enough to be in the lottery.

So the most logical thing the Blackhawks should do is to trade away their veteran players and rebuild for the future. 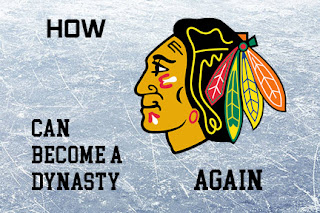 At the trade deadline, the Chicago Blackhawks make one trade:

The Bruins need a Left Defenseman to pair with Charlie McAvoy, and Duncan Keith is the perfect fit for this role.

The Chicago Blackhawks miss the playoffs in the 2020-21 season and end up with the 8th pick in the draft.

Chicago Blackhawks lose David Kampf to the Seattle Kraken in the expansion draft.

The Blackhawks swap Dylan Strome for Nolan Patrick, deal away Zadorov, Delia for Aube-Kubel, and a 3rd.

The Chicago Blackhawks draft Kent Johnson and Colton Dach to bolster their offense and Artem Grushnikov to be a huge part of their defense.

Scott Laughton, Brock McGinn get signed to 3 yr deals worth 2.5 million per season

The Chicago Blackhawks miss the playoffs again in the 2021-22 season and end up with the 7th pick in the draft.

Before the 2022 draft, the Chicago Blackhawks make one major trade:

The Sabres get Jack Quinn, a talented-young scorer, 1st round pick for Patrick Kane.

The Chicago Blackhawks narrowly miss the playoffs in the 2022-23 season and end up with the 15th pick in the draft.

The Blackhawks add OEL, a top-notch offensive defenseman to anchor their defense.

By the 2023-24 season, the Chicago Blackhawks have built a contending team

The Chicago Blackhawks have now built a dominant team that looks like it has the potential to be the next dynasty.

How New York Rangers can become a Dynasty

The New Rangers already have some nice pieces in place, but for some reason, they just can seem to put it all together. If they draft correctly and make the right trades, the Rangers have the potential to become a dynasty. 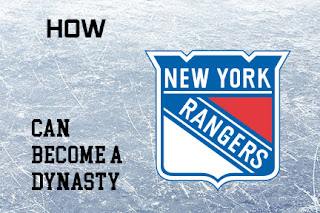 At the trade deadline, the New York Rangers make one major trade:

The Rangers get a Marc Eduord Vlasic, who has a terrible contract but will also gain a 1st round pick for taking on his contract. The Sharks get Pavel Buchnevich and Ryan Strome, two top 6 forwards, and Brendan Smith, a top 6 defenseman.

The New York Rangers miss the playoffs in the 2020-21 season and end up with the 5th pick in the draft.

The New York Rangers lose Brendan Lemieux to the Seattle Kraken in the Expansion draft.

The New York Rangers draft Brandt Clarke and Mason McTavish, two high-end prospects, who will be a big part of their core; Nikita Chibrikov and Issac Belliveau can be great complementary pieces for the Rangers down the road

The New York Rangers make the playoffs in the 2021-22 season but end up losing in the first round of the playoffs.

Kakko Kakko hasn't quite fit in with the New York Rangers, so perhaps a change of scenery would be good for him; this is a great return for the Rangers considering Kakko has yet to live up to his draft potential.

Before the 2022 draft, the New York Rangers trade Mika Zibanejad to the Detroit Red Wings for Filip Zadina, 2022 1st round pick in a sign and trade.

The Rangers get a terrific return for Mika Zibanejad, a player that was going to become a UFA and save a ton of cap room.

At the 2022 draft, the New York Rangers trade Filip Chytil, Vitaly Kravtsov, pick 4, 2023 1st round pick to the Ottawa Senators for pick 1.

The New York Rangers win the Presidents' Trophy in the 2022-23 season but lose in the Conference Finals.

Alexis Lafreniere is re-signed to a 6yr deal worth/6.66M per season.

By the 2023-24 season, the New York Rangers are a Stanley Cup Favorite:

The New York Rangers have now put together a dominant team that looks like it could be the NHL's next dynasty.

HOW LA KINGS CAN BECOME A DYNASTY

The LA Kings are a rebuilding team right now, but if they make the right trades and draft correctly, they could become a dynasty. 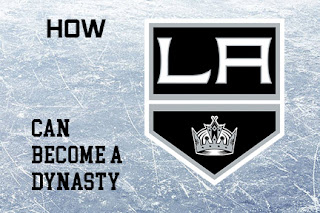 At the trade deadline, the LA Kings make one major trade:

The Kings get Jarnkrok and Grimaldi, two solid role players, as well as a 2nd round pick for Jeff Carter and Alex Aifallo, a pending UFA.

The LA Kings finish the 2020-21 season with the 4th worst record in the league.

LA Kings lose Andreas Athanasiou to the Seattle Kraken in the Expansion draft.

Before the 2021 draft, the LA Kings trade Jonathan Quick to the Carolina Hurricanes for James Reimer, Brock McGinn, and a 2021 2nd round pick.

The trade gives the Kings a reliable 1B to tandem with Cal Petersen, Brock McGinn, and a 2nd round pick.

LA Kings re-sign James Reimer to a 3yr deal worth 3.5 million per season.

LA Kings sign Tomas Tatar to a 6yrs deal worth 6.25M per season.

The Kings get three really good players in Nylander, Dermott, and Robertson, as well as a 1st round pick for Drew Doughty.

The LA Kings draft Seamus Casey and Devin Kaplan, two prospects that will be a big part of their future.

LA Kings re-sign Travis Dermott to a 2yrs deal worth 2.75 million per season.

The LA Kings have a much better record in the 2022-23 season, but miss the playoffs; they end up with the 14th pick in the draft.

After the season, one major trade is made:

The Kings get Jonathan Huberdeau, a star winger, that will be a huge part of the core for a long time.

By the 2023-24 season have put together a contending team.

By drafting correctly and making the right trades, the LA Kings have set themselves up to be a dynasty in the future.

HOW CALGARY FLAMES CAN BECOME CONTENDERS

The Calgary Flames are a solid team in the regular season but can't seem to make it far in the playoffs. If the Flames want to make a deep run, they will need to retool the team to build a team more suitable for the playoffs. 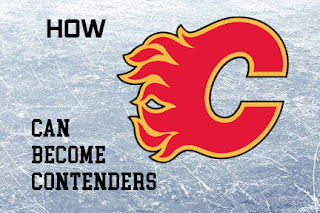 At the trade deadline, the Calgary Flames make one major trade:

The Flames add Namestnikov and Fabrri to bolster the roster for the playoffs.

The Calgary Flames make the playoffs in the 2020-21 season but get eliminated in the second round of the playoffs.

The Calgary Flames buyout Milan Lucic; the buyout will cost them 583k annually until 2025.

The Calgary Flames lose Andrew Mangiapane to the Seattle Kraken in the expansion draft.

Before the 2021 draft, two major trades are made:

This is a one-for-one swap of Hall for Gaudreau; both need a change in scenery.

The Ducks get Mikael Backlund, while the Flames get Lundestrom and Terry, two solid young players, and a 2nd round pick.

The Calgary Flames once again make it to the second round of the playoffs in the 2021-22 season;

however, they would once again lose in 6 games.

Before the 2022 draft, the Calgary Flames make two trades:

The Senators get Sean Monahan, a great top-line center for Logan Brown, and a 1st round pick.

The Flames also trade Noah Hanifin, Vladislav Namestnikov to the New York Islanders for the 2022 1st round pick.

The Islanders get Noah Hanifin and Vladislav Namestnikov for a 1st round pick.

The Calgary Flames draft Rugter McGroarty, Juraj Slafkovsky, and Charlie Leddy, three prospects that will be a huge part of their future.

After the season, the Calgary Flames make one huge trade:

The Flames add Thomas Harley and Jason Dickinson for Oliver Kylington, a great young defenseman, Logan Brown, a solid third-line center, and a 1st round pick.

By the 2023-24 season, the Calgary Flames have put together a legit contender.

The Calgary Flames have now built a team that looks like it could be a legit contender, with the potential to be a dynasty.