What If Florida Panthers Drafted Correctly in the Last 5 Years 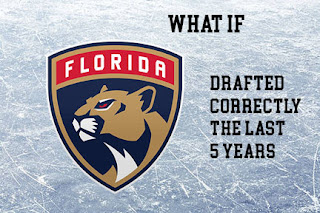 Matt Barzal and Kirill Kaprizov will some much needed secondary scoring to the team and Ethan Bear can be a solid top 4 defenseman.

Sam Girard is a solid young top 4 defenseman, while Tage Thompson can grew to be a good power forward

Robert Thomas is much better then Owen Tippett at this point in their careers.

No Change in draft picks

The Panthers still draft Spencer Knight but draft Nic Robertson over Vladislav Kolyachonok, which is a major upgrade.

No Change in draft picks

Due to the Changes in draft picks, the Panthers have to make several trades:

The Panthers add Steel and Comtois, two great young players and Josh Manson as well as a 1st round pick picks for Aaron Ekblad.

The Panthers trade Keith Yandle for Noah Hanifin, a defenseman who is entering his prime and a 1st rd pick.

The Panthers get a very talented defenseman in Ryan Merkley, which really bolter the young defense.

In a separate trade, Noel Acciari is dealt to the San Jose Sharks for a 6th rd pick '21.

This is a cap dump on the part of the Panthers.

The Panthers unload Connolly and Vatrano to the Senators and gain a valuable depth player in Bjork and a draft pick at the same time.

The Panthers dump the Anton Stralman contract along with two prospects to the Senators for Connor Brown, a top 9 forward and a 3rd round pick.

If the Florida Panthers had drafted correctly the last 5 years, they would have be poised to be contenders this upcoming season.

The Dallas Stars had a really good playoff run last season and made it to the Stanley cup finals without Jamie Benn or Tyler Seguin doing that much. If the Stars want to remain a playoff team, they might have trade one of the two because it is clear that they aren't as effective as a duo anymore. 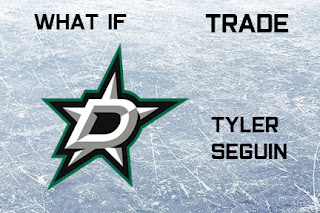 Jamie Benn is the Captain of the Dallas Stars and still has plenty of value even if he isn't scoring; Tyler Seguin on the other hand is purely a goal scorer and doesn't do much anything else, so it would make sense to trade Tyler Seguin.

The Hurricanes get Tyler Seguin, a very good scorer, while the Stars get Vincent Trocheck and Nino Niederreiter, two top 6 forwards along with Martin Necas, a talented young forward and a 1st round pick.

The Devils get a savvy veteran winger in Alex Radulov, while the Stars get two talented young players, Alex Radulov and Jesper Boqvist plus a 2nd round pick.

The Dallas Stars narrowly miss the playoffs and finishing with the 15th worst record in the league.

The Dallas Stars lose Jamie Oleksiak in the expansion draft to the Seattle Kraken.

The Stars draft three top end prospects that will be a big part of their core in the future.

After the draft, two major trades are made:

The Rangers get John Klingberg, a great puck moving defenseman, while the Stars add two great prospects in Braden Schneider and Evgeny Kravtsov plus a 1st round pick.

Ben Bishop is traded to the Buffalo Sabres for Casey Mittelstadt, Tage Thompson, 2nd round pick 2022.

The Sabres get Ben Bishop, a former Vezina trophy winner, while the Stars get Mittelstadt and Thompson, two solid young players and a 2nd round pick.

Dallas Stars re-sign Miro Heiskanen to a 8 yr deal worth 7.5 million per season.

Joel Kiviranta is re-signed to a 3 yr deals worth 2.5 million per season.

Dallas Stars sign Brandon Montour to a 2 yr deal worth 4 million per season.

The Dallas Stars finish the 2021-22 season with the 9th worst record in the league but end up with the 11th pick in the draft.

The Stars draft Rutger McGroarty, talented center, who should be their number 1 center for years to come.

Dallas Stars re-sign Denis Gurianov to a 5 yr deal worth 4.5 million per season.

Dallas Stars sign Michal Kempny to a 3 yr deal worth 2.5 million per season.

The Dallas Stars finish the 2022-23 season with a much better record but still miss the playoffs.

The Stars get Elias Lindholm, a talented forward that can rack up points for Vitaly Kravtsov and a 1st round pick.

Anton Khudobin is re-signed to a 2 yr deal worth 2.75 million per season.

By the 2023-24 season, the Dallas Stars have assembled a deadly team that could contend for a Stanley cup.

The Dallas Stars are now a Stanley cup caliber team and have potential to win multiple stanley cups in the next few years.

What if Calgary Flames trade Johnny Gaudreau and Sean Monahan

The Calgary Flames are a borderline playoff team right now but if they don't make any changes to their core they won't be making it far in the playoffs.

Two core players that have been brought up the most in trade talks are Johnny Gaudreau and Sean Monahan. 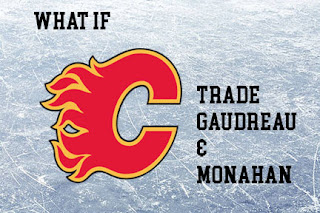 Trading Gaudreau and Monahan would allow the Calgary Flames to begin a new chapter and hopefully have more playoffs success in the long run.

The New Jersey Devils get Johnny Gaudreau, a dynamic playmaking winger, who will be a tremendous fit on a line with Hischier and Palmieri. Calgary Flames also get a top 6 forward in Nikita Gusev and a top 9 forward in Jesper Bratt, as well as two very good prospects in McLeod and Boqvist. The Flames will also the the Devils first round pick in 2022.

The Senators get a tremendous first line center in Sean Monahan, who just will be a tremendous fit on the up and coming Ottawa Senators. Calgary also gets three very good prospects in Norris, Batherson and Brannstrom and a 2nd round pick that could become a 1st round pick.

Jesper Bratt is re-signed to a 2 yr deal worth 3 million per season.

The Calgary Flames finish the 2020-21 season with the 5th worst record in the league but they get lucky and jump up to the 3rd pick in the draft.

The Calgary Flames buyout Milan Lucic, which costs them 583k per season until 2025.

Calgary Flames lose Jesper Bratt in the Expansion draft to the Seattle Kraken.

Before the 2021 draft, the Flames make two major trades:

The Penguins get a terrific defenseman in Mark Giordano and a solid 1B in David Rittich to tandem with Tristian Jarry. On the flip side, Calgary gets Brian Dumoulin, a top 4 defenseman and a 1st round pick.

The Flames acquire Juuse Saros from the Nashville Predators for 2nd round pick 2022.

The Flames get their 1B to pair with Jacob Markstrom, while the Predators get to hand the reigns over to Connor Ingram in goal.

The Flames get two blue chip prospects in Brandt Clarke and Zachary Bolduc and a very solid center prospect in Cole Huckins.

The Calgary Flames finish the 2021-22 season with the 4th worst record but end up with the 6th pick in the draft.

The Flames draft 3 top notch prospects in Ivan Miroshnichenko, Jack Devine and Simon Forsmark; all three players should be a key part of their core in the future.

Calgary Flames re-sign Matthew Tkachuk to a 8 yr deal worth 7 million per season.

Erik Brannstrom, Josh Norris are re-signed to 3 yr deals worth 3.25 million per season.

The Calgary Flames finish the 2022-23 season with the 10th worst record in the league but one team jumps them in the lottery and the drop to the 11th pick in the draft.

Before the 2023 draft, two big trades are made:

The Flames get Ryan Lindgren, a physical top 6 defenseman and Filip Chytil, a top 9 forward and a 2nd round pick, while the Rangers get Noah Hanifin, a very solid top 4 defenseman to stabilize their defense.

The Ducks get Mikael Backlund, a solid 2nd line center, while the Flames get Lundstrom, Jones and Terry, three solid role players and a 2nd round pick.

The Flames get a very talented winger in Ondrej Molnar, that only adds to their overwhelming prospect pool.

Ryan Lindgren, Filip Chytil is re-signed to 4 yr deals worth 3.25 million per season.

By the 2023-24 season, the Calgary Flames have put together a very good team and could become legit contenders.

By trade Gaudreau and Monahan, the Calgary Flames now have a team that is built to thrive in the playoffs.

What if Chicago Blackhawks trade Jonathan Toews and Patrick Kane

The Chicago Blackhawks seem to be headed towards a full fledge rebuild but if they have Patrick Kane and Jonathan Toews on the team, it may affect their chances of getting a top pick in the draft.

The best thing Chicago can do is trade Patrick Kane and Jonathan Toews so they can play for another Stanley cup and so the Blackhawks can full on tank. 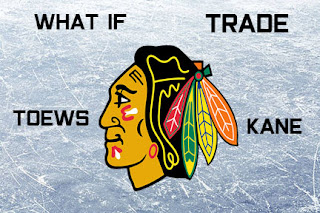 The Buffalo Sabres get Patrick Kane, a superstar that can help bring the franchise to new heights, while the Chicago Blackhawks get Sam Reinhart, a top 6 forward, Rasmus Ristolainen, a top 4 defenseman, a top prospect in Casey Mittelstadt and a 1st round pick.

The New York Islanders get Jonathan Toews, one of the best leaders in the NHL, which makes the Islanders a legit contender, on the flip side, the Blackhawks get two very good players in Brock Nelson and Josh Bailey and a 1st round pick.

Chicago Blackhawks re-sign Dylan Strome to a 3 yr deal worth 3.8 million per season, Casey Mittelstadt to a 2 yr deal.

Chicago Blackhawks sign Ben Hutton to a 1 yr deal worth 2 million per season.

Without Kane and Toews, the Chicago Blackhawks finish the 2020-21 season with the 3rd worst record in the league but slide to the 5th pick in the draft.

Chicago Blackhawks lose Connor Murphy to the Seattle Kraken in the expansion draft.

Chicago Blackhawks buyout Brent Seabrook, which costs them 833k per season until 2027.

New Jersey Devils get a savvy Veteran Defenseman that can help mentor the Devils young defenseman, while the Blackhawks get to move his salary and get a 3rd round pick which is pretty good value for a 38 year old defenseman.

The Rangers get Josh Bailey, a top 6 forward and a top 4 defenseman in Rasmus Ristolainen, while the Blackhawks get Vitaly Kravtsov, a very talented prospect lost in the shuffle with the Rangers and a 1st round pick.

The Blackhawks draft three really good defenseman in Artem Grushnikov, Luke Hughes and Aiden Hreshchuk; They also get a very talented center in Mason McTavish and a skilled sniper in Isak Rosen.

Chicago Blackhawks re-sign Sam Reinhart to a 4 yr deal worth 5.8 million per season.

The Chicago Blackhawks finish the 2021-22 with the 6th worst record in the league but slide to the 9th pick in the draft.

The Blackhawks get a star forward in Filip Forsberg, Yakov Trenin and a 2nd round, while the Predators get two very good forwards in Alex DeBrincat and Dylan Strome.

The Blackhawks get their future franchise goalie in Spencer Knight, while the Panthers get Brock Nelson and a 2nd round pick.

After the draft, one major trade is made:

The Blackhawks get Rasmus Sandin, a very good young puck moving defenseman, while the Maple Leafs get Alex Nylander, Nikita Zadorov and a 1st round pick.

Chicago Blackhawks sign Bryan Rust to a 4 yr deal worth 3.5 million per season.

The Chicago Blackhawks just make the playoffs in the 2022-23 season but are knocked out in the 1st round by the Colorado Avalanche.

Chicago Blackhawks re-sign Ian Mitchell to a 3 yr deal worth 2.5 million per season.

By the 2023-24 season, the Chicago Blackhawks have built an outstanding team.

The Chicago Blackhawks look like a very good team and look poised to be contenders for many more years to come.