These are the best defenseman so far this season in Fantasy Hockey: 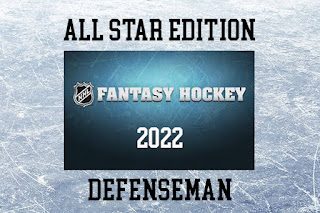 Rasmus Dahlin has been by far the best defenseman in Fantasy this season, and it isn't close; he has 13 goals, 35 assists, 23 PPP, 119 SOG and a +16 rating on a bad Buffalo team. If Dahlin can sustain this type of production for the rest of the season, he will be a favorite to win the Norris trophy.

Cale Makar has been a tad bit disappointing considering he was a top 5 pick in most fantasy drafts, but he is still having a fantastic season; he has tallied 13 goals, 30 assists, 21 PPP, 136 SOG, along with 3 GWG and a +7 rating. His dip in production may be due in large part to the injuries on Colorado, but as the team gets healthy, look for a strong second half from Cale Makar and Colorado.

Roman Josi has once again been the best player for the Nashville Predators, putting up 12 goals, 23 assists, 17 PPP, 187 SOG, 4 GWG and a surprising 100 blocks, which is only 33 shy of last year's total. Although Josi isn't having the year that he was last season, he certainly has been amongst the top-performing defenseman in fantasy this year. Watch out for Josi in the second half because if Nashville is to make a playoff push, Josi will have to be a major part of it.

Josh Morrissey is having a career year this season with the Winnipeg Jets, putting up 8 goals, 40 assists, 19 PPP and 4 GWG, with a +11 rating. He has been a major part of the Winnipeg Jets' success early this season, and if he keeps up this scoring pace, will be on track for new career highs.

Erik Karlsson is having a bounce-back season for the ages, putting up 14 goals, 44 assists, 16 PPP, 121 SOG, 3 GWG, and a -6 rating. This has been far and away his best season as a San Jose Shark, and it's not a coincidence that it occurred after the Sharks traded away Brent Burns. Karlsson is on pace for his best season since 2016-17, when he was considered to be one of the league's best defensemen.

Adam Fox has been one of the best New York Rangers this season, tallying 9 goals, 36 assists, 15 PPP, along with 101 SOG, 4 GWG and a +19 rating. As great as Fox has been, it will pale in comparison to the other defenseman who is on this list.