These have been the best goalies in Fantasy Hockey this season 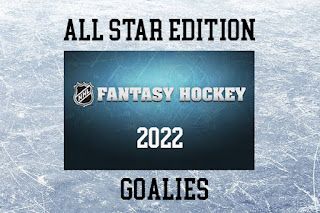 Linus Ullmark has statistically been the best goalie in the entire NHL, with a dominant 22-1 record, a 1.87 GAA,.938 SV%, and 2 shutouts. It's rather unfortunate that Ullmark won't be named a starter because there is just so much star talent on the Bruins, but he has been an important part of the team. It's worth noting that Jeremy Swayman has a 9-3 record with a 2.51 GAA, and .905 SV%, which is decent, but a far cry from how dominant Ullmark has been this season.

After a rough season last year, Connor Hellebuyck is having a tremendous season with the Winnipeg Jets; he has a 20-10 record with a 2.42 GAA, .924 SV%, and 3 Shutouts. Although Hellebuyck is not an All-Star starter in the Central division, he has outplayed Saros this season by a wide margin. Moreover, he has been a major reason why the Jets are currently sitting in 2nd place in the division.

Jake Oettinger is having a tremendous start to the season with the Dallas Stars; he has a 19-6 record 2.29 GAA, .923 SV%, and 2 shutouts. Although Oettinger is not an All-Star starter in the Central division, he has definitely been a better goaltender than Saros this season; it's just that every team needs representation. Moreover, Oettinger has been a major reason why the Stars are sitting in 1st place in the Central Division.

After a less-than-stellar start to the season, Igor Shesterkin is back to playing like he was last year; he has a 19-6 record with a 2.49 GAA and .916 SV%. He is voted a starter for the NHL All-Star game this year and has been by far the best goalie in the Metropolitan division. Expect a strong second half from Shesterkin as the Rangers look to kick it into overdrive to clinch a playoff spot.

Andrei Vasilevskiy had a slow start to the season, but has really come into his zone in the last month of the season; he has a 6-2 record with a 1.99 GAA and .935 SV%. He is voted a starter for the NHL All-Star game this year and has been by far the best goalie in the Atlantic Division. You can expect Vasilevskiy to have a strong second half, as Tampa has notoriously been a second-half team the last couple of years.

Ilya Sorokin is having a tremendous start to the season with the New York Islanders this season; he has a 14-13 record with a 2.30 GAA, .925 SV%, and 3 Shutouts. In the first two months of the season, Sorokin was arguably the best goalie in the Metro division and was a major reason the Islanders were off to such a hot start. Although the Islanders' play of late has not been great, Sorokin has still been pretty good in the net.