Here are some Left Wingers you should consider dropping: 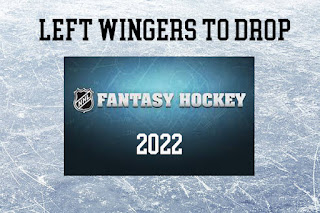 Andre Burakovsky got off to a hot start to the season with the Seattle Kraken, but in the last two weeks of the season, he has failed to register either a goal or a point. Burakovsky is still owned in 43% of fantasy leagues, but that number will decrease drastically if his scoring slump continues. Burakovsky has a track record of being highly inconsistent, I would consider dropping him if you find better options on the waiver wire.

Tyler Bertuzzi is having a rough season so far, only having recorded 1 goal, 3 assists, and 1 PPP in 9 games. Bertuzzi has been injured twice already this season for an extended period of time and his production doesn't warrant using an IR spot to keep him. If you still own Bertuzzi, I would cut bait now because you could probably still pick him up when he is healthy again.

Alexis Lafreniere was a healthy scratch recently for the New York Rangers, and before that had only recorded 1 point in the last two weeks. If Lafreniere is not moved to another team, I don't see him turning his season around, so I would probably drop him and replace him with better players.

Anthony Cirelli has been decent since his return to the lineup for the Tampa Bay Lightning, tallying 1 goal, 7 points, 1 PPP, 35 SOG, 78 FW, and a +3 rating. Cirelli doesn't particularly excel in any category and has failed to register a point in the last two weeks. I would consider dropping Cirelli in favor of players who can fill up garbage categories.

Ivan Barbashev is having a slow start to the season, having only put up 5 goals, 11 assists, 3 PPP, 56 SOG, 80 hits, along with 1 GWG. Barbashev hasn't been getting much of a chance to showcase his offensive skillset with St.Louis this season, as he has bounced around the lineup frequently. Barbashev is owned in 14% of fantasy leagues, and that percentage could decrease if he continues to have scoring woes.

After a red-hot start to the season, Schwartz only has record 2 points and a -5 in the last month of the season. Schwartz is owned in only 5% of Fantasy leagues, and is not fantasy relevant anymore unless you are in a deep league.