Here are the standout forwards in Fantasy Hockey so far this season: 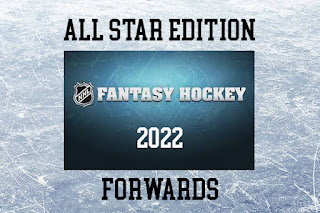 Connor McDavid is scoring at an unreal pace to start the season, he already has 40 goals, 48 assists, 43 PPP, along with 200 SOG and 6 GWG so far this season. He is the favorite to win the Hart Trophy at the current moment, and unless someone has an unreal second half, I don't see anyone surpassing his goal or point total. McDavid has maintained his position as the top-ranked player in Fantasy since the start of the season.

Bo Horvat is having a career year this season because he wants to get paid, as a result, he already has 30 goals, 19 assists, 17 PPP, 4 GWG, 135 SOG, and 589 Faceoff wins so far this season. Statistically, Horvat has been one of the better Vancouver Canucks this season, which has certainly made his fantasy owners happy. Horvat was ranked 103rd overall in fantasy at the start of the season, and now he is ranked 9th overall in fantasy.

While Leon Draistaitl isn't having the type of year that McDavid is having, he is also having a terrific start to the season, with 28 goals, 45 assists, 35 PPP, 143 SOG, 9 GWGs and 444 Faceoff wins. He doesn't get much love in the Hart conversation because he plays with McDavid, but he consistently is at the top of the league in scoring. Draisaitl has maintained his position as the 2nd best player in Fantasy since the start of the season.

Jason Robertson launched himself into superstardom this year by putting up 32 goals, 33 assists, 24 PPP, 195 SOG, 5 GWG, and a +28 rating so far this season. He played so well at the start of the season, that some people even considered him a Hart candidate since he was a major reason for Dallas' success early on. Robertson was ranked 34th overall at the start of the season, and now he is ranked  7th overall in Fantasy.

David Pastrnak is having yet another fantastic year and unfortunately for the Bruins, if they want to retain his services, they will need to pay up. Pastrnak already has 36 goals, 29 assists, 27 PPP, 219 SOG, 5 GWG, and a +26 rating so far this season, helping the Bruins to be the highest-scoring team in the league. Pastrnak was ranked 7th overall at the start of the season, now he is ranked 3rd overall in fantasy.

Tage Thompson surprised everyone by putting up new career highs in every statistical category, which resulted in the Sabres locking him up to a massive 7-year extension. Thompson has 32 goals, 31 assists, 25 PPP, 189 assists, 5 GWG, 233 Faceoff wins, and a +13 rating so far this season, which resulted in a lot of people putting him in the Hart conversation early on. Although he has cooled off a bit as of late, Thompson is still the 6th best player to have in fantasy.