Here are some Right Wingers to pick up on the Waiver Wire: 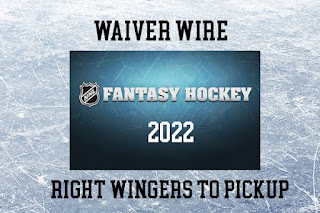 Due to injuries, Owen Tippett has been pushed up to the top line of the Flyers and is also playing on their top powerplay unit. He has 3 goals, 5 points, 1 PPP, 24 SOG, 13 hits, and 8 blocks in the last two weeks, but he is a -9. This could be a risky pickup due to his +/- but because all of his other categories are pretty strong, he is worth picking up.

Eberle has 2 goals, 5 points, 1 PPP, and 12 SOG in the last two weeks and is a solid option to have in a deep league, as he plays a top 6 role for Seattle and plays on the 1st PP unit. In leagues with hits and blocks, there could be better options, but for leagues with just goals, points, and PPP, he is worth a pickup.

Garnet Hathaway is a 5-star play to have in a cat league; he is a stat sheet stuffer and will get a little bit of everything. Hathaway has 1 goal, 13 SOG, 22, and 9 blocks in the last two weeks on a Washington team that has been struggling of late. It is not a bad idea to pick him up because he has been one of the constants for Washington this whole season.

Blake Coleman is currently playing on the third line of the Calgary Flames alongside Mikael Backlund and Jonathan Huberdeau. He has 2 goals, 5 points, 10 SOG, and 12 hits in the last two weeks, and has been much better since getting moved onto the Huberdeau line. Coleman is a solid option to have in leagues with SHP, as he is a player who is a threat shorthanded.

Travis Boyd is the first-line center for the Arizona Coyotes right now playing on the line Clayton Keller and the 2nd PP unit. Boyd may be playing center, but he is eligible to play RW as well in Fantasy, while is a major bonus for leagues with Faceoff wins because you are getting Faceoff wins from the wing position.

Nick Bjugstad is another Arizona Coyotes player who has duel eligibility as a Center and Right Winger. Bjugstad has 2 goals. 3 Points, 1 SHP,  and 38 FW in the last two weeks, which is great production for a player who is 1% owned. Consider him as an option in a deep league.