Here is some Defenseman to pickup in Fantasy Hockey: 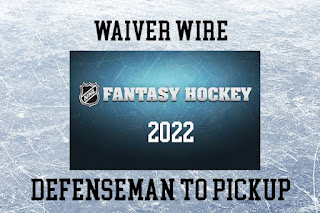 Alec Martinez may not have the offensive production he used to have and he is almost allergic to throwing hits, but he league leader in blocked shots with 51. Vegas has played 11 games this season, which means that Martinez has an average of 4.63 blocks per game, which is remarkable at the age of 35. Martinez doesn't really do much else besides blocking a lot of shots but if your team does need more blocks, Martinez is the guy to add, if still available.

Surprisingly Adam Larsson has 2 goals and 3 points and is a +7, early in the season, but what is not surprising is that he has 16 SOG, 23 hits, and 21 blocks. Larsson has been consistently a reliable source of hits and blocks in the past few years, and while his offensive production drops off, he should help you garbage categories. Larsson is owned in 18% of fantasy leagues and would be a very valuable defenseman in a CAT league.

Connor Clifton is quietly putting together a monster season in the absence of Charlie McAvoy and has been a massive part of the Bruins' early season success. He has 4 points, 19 SOG, 34 Hits, and 16 blocks and is a +3 so far this season, and is a defenseman that can fill up the garbage categories for you. Clifton is owned in 26% of fantasy leagues, but he should be owned in more leagues, especially in CAT leagues.

Jamie Oleksiak has always been a hidden fantasy hockey gem if you are trying to fill up the stat sheet in fantasy hockey. Oleksiak has 2 goals and 4 points along with 34 hits and 20 blocks so far this season but is a -3. He is only owned in 5% of fantasy leagues because not many people are paying attention to the Seattle Kraken, who have quietly assembled a solid team.

Brenden Dillon may not do much for you offensively, but he will give you a solid number of hits and blocks every night. He is only owned in 9% of fantasy leagues, and would really only have value if you are in a deep league or in a league with hits and blocks. Dillon is a solid option, if you want to add more hits or blocks to your lineup.

Adam Pelech has been an underrated defenseman for a long time; he quietly puts up solid numbers but never gets the recognition he deserves. So far this season, Pelech has 4 points, 13 SOG, 18 hits, 18 blocks, and is a +6, which is not flashy but is solid.  Pelech is owned in only 4% of Fantasy Hockey leagues and would help many fantasy teams, especially deep rosters.