Here is a list of Left Wingers to pickup: 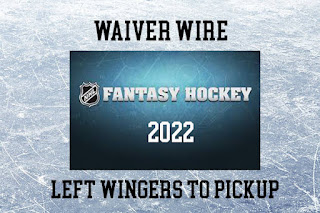 Zach Parise has worked his way back into the Fantasy scene in deeper leagues as he has quietly has put together a very solid statline. He has 5 goals, 3 assists, 1 PPP, 1 SHP, 40 SOG, 15 Hits, 19 blocks, and is a +9. This is a great all-around statline, and while he isn't going to produce offensively every night, he will get a healthy dose of SOG and he has a good +/-.

Despite the recent slump, Nick Ritchie still has played very well for the Arizona Coyotes this season. Ritchie has 6 goals, 6 PPP, 22 SOG and 32 Hits so far this season and has been a major part of Arizona's lethal Powerplay.

Adam Henrique is definitely not the same player he once was but he can still be a solid option in fantasy leagues because of he is eligible to play both the Center and Left Wing. Henrique has 5 goals, 2 assists, 1 PPP, 27 SOG, 74 FW, 14 Hits, and 5 blocks so far this season playing on the Wing with Trevor Zegras and Troy Terry; he also is a part of Anaheim's 1st PP unit. Having Wingers that can win faceoffs in your lineup is a huge advantage and Henrique is one who gets overlooked a lot because he plays on a bad team.

Matias Maccelli has played tremendously for the Arizona Coyotes recently, putting up 1 goal, 4 assists, 2 PPPs, and 1 GWG in the last week. He is currently playing on Arizona's 2nd line and 2nd PP unit and is owned in 3% of Fantasy leagues. He is a player to consider adding to a deep league.

Noah Cates has been thrust into a top 6 role for the Philadelphia Flyers due to injuries to JVR, Cam Atkinson, and Wade Allison. Cates is centering the Flyers' second line with Scott Laughton and Joel Farabee and has played pretty well in that role. He has 1 goal, 2 assists, 1 PPP, 11 SOG, 23 FW, 12 Hits, and 2 blocks in the last week.

Alexander Barabanov has played excellent in the last week of the season, putting up 1 goal, 3 assists, 2 PPP, and 11 SOG, playing alongside Logan Couture on the Sharks' second line. Barabanov is eligible to play RW as well, which makes his value a bit higher than if he could only play LW. He is only owned in 2% of fantasy leagues and would be a good player to have in a deep league.