Here are some players you should consider picking up for Fantasy Hockey: 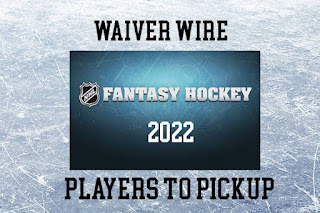 David Krejci is back and it seems like he never left; Krejci centers  "The Czech Line", which features David Pastrnak and Pavel Zacha. The line has gotten off to a terrific start and he has done a great job filling in for Brad Marchand on the Powerplay as well. Krejci has 1 goal, 3 assists, and 1 PPP, along with 15 FW so far this season.

Nic Dowd is not a player who should be owned in standard leagues, but if you are in a CAT league, which includes FW and Hits, he should definitely be rostered. Dowd is top 50 in FW amongst centers so far this season and he leads Centers in hits. Down has 1 goal, 1 assist, 23 FW, 19 hits, and 3 blocks, which makes for a very good fantasy stat line.

Jaden Schwartz has gotten off to a terrific start to the season, putting up 2 goals, 1 assist and 2 PPP along with 13 SOG, and 8 hits. When healthy Schwartz is a very productive player, but the issue is he hasn't been healthy for the past two years. With a start like this, it would be tough to pass up taking a flyer on him because he is finally being played with NHL-caliber talent.

It's crazy that Gabriel Vilardi is only rostered in 13% of Fantasy leagues with the type of start that he has had to the season. Vilardi already has 3 goals, 2 assists, 10 SOG, and is a +3 so far this season, playing on a line with fellow young studs Quinton Byfield and Arthur Kalieyv. That third line for LA has worked wonders and will be the reason why the LA Kings will be tough to play against this year.

Calen Addison is going to be a beast this year for the Minnesota Wild if he can sustain the production that he has had early on in the season. Addison has 4 assists and 3 PPPs but is a -5 so far this season; while the +/- is bad, Addison's PP production may be good enough to offset that. Addison is playing on Minnesota's 1st PP unit at the moment so if he can remain productive in the spot, he will have fantasy value.

Not many people had this defenseman on their radar before the season began but now he has become a must-own player in banger leagues. Xhekaj already has 16 hits and 7 blocks along with 5 SOG to go along with 1 point, which is excellent production in leagues with hits and blocks. If Arber is still available for some reason in your league, scoop him up fast.

It is a big risk to own a goalie for the Arizona Coyotes but if you are in a league that counts saves and you need a 4th string goalie, Vejmelka might be the goalie you want to get. He has already faced 123 shots in 3 games and stopped 110 of them; his 110 saves is 15 more than the next closes goalie, John Gibson. Vejmelka is a high-risk high-reward pickup, but on a good night, you could get a 35+ SV win.