Here is my list of Breakout players and Sleepers this year in Fantasy Hockey. 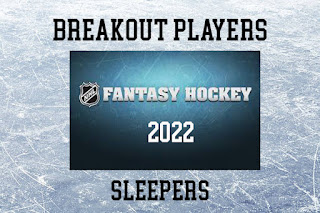 Tim Stutzle is my big Breakout candidate this year because he will be playing on a line with Alex DeBrincat and Claude Giroux. He put up 52 points last year playing with different linemates every other game, so you can expect a 70+ point season playing with these two star players. Tim Stutzle is finally surrounded by great offensive talent that can feed off his, so be ready for a great campaign from the German pivot.

Matt Boldy burst onto the NHL scene putting up 15 goals, 39 points, and 10 PP in 47 games last year with the Minnesota Wild. Boldy is projected to play on Minnesota's 3rd line alongside Sam Steel and Fredrick Gaudreau, and it's 2nd PP unit; however, I can see Marco Rossi overtaking Steel in the lineup eventually. It is not out of the possibility for Boldy to score 60+ points, and 15+ PP this season, considering how productive he was in the second half of last season.

Seth Jarvis had a phenomenal start to his NHL career, putting up 17 goals and 40 points in 68 games last season with the Carolina Hurricanes. After being promoted to play on the line with Aho and Teravainen, Jarvis was really productive and he should continue to be productive playing alongside those two players. Jarvis is also playing on Carolina's 1st PP unit, which makes his fantasy value even higher. I can see Jarvis putting up 60+ points, 12+ PP this season.

Bowen Byram really shined in the playoffs for the Colorado Avalanche, and showed flashes of his sky-high potential; in the Avs Stanley Cup run, Byram tallied 9 points and was a +15. Byram will be playing on the 2nd D pair of Colorado and will see time on the 2nd PP unit, which will lead to greater production in comparison to last season. Byram should be a player fantasy owners target in Keeper leagues especially because he will one day be paired alongside Cale Makar.

Matt Dumba had a good season last year putting up 7 goals, 27 points, 5 powerplay points, and was a +9; he also had 84 hits and 114 blocks as well.  He will once again play an important role on the Minnesota Wild blueline, who is as a whole made up of underrated players, who don't get enough buzz. If he can equal or better his production from last season, he will be a sleeper considering he is drafted 13th or 14th round.

Spencer Knight has been a highly touted goaltender prospect for a long time but he has never gotten the opportunity to be the number 1 in Florida. With Bobrovsky getting another year older, I would expect Knight to get a heavier workload in the net and perhaps maybe be the starter if he plays well enough. This makes him a prime candidate for being a breakout player in Fantasy Hockey.

Vincent Trocheck has always been underrated in Fantasy because he played for a team-oriented Carolina team who makes a habit of not making any particular player greater than the team. However, Fantasy owners who play in Head to head leagues which include FW and Hits and +/- should know how valuable a player like Trocheck can be.Vincent Trocheck will play on a line with Artemi Panarin and is also playing on the Rangers' 1st powerplay unit, which should make him a lock for a 20+ goal, 50+ point season.

Artturi Lehkonen has the potential to be the ultimate sleeper in Fantasy Hockey this season because he isn't a big name but he plays on a line with superstar players. Lehkonen is projected to play on the line with Nathan MacKinnon as well as the 1st powerplay unit. Because Gabe Landeskog will miss the start of the season, Lehkonen will have incredible fantasy value as long as the Captain remains sidelined.

Alexander Romanov will have a greater role this season after being traded to the New York Islanders and is being paired with Noah Dobson. Romanov is projected to play on the Islanders' 2nd D pair and 2nd powerplay unit and is a useful player to have if your league counts hits and blocks. His offensive production would be an added bonus, but owners getting Romanov can expect him to get over 200 hits and 100 blocks.

Vince Dunn had a decent season last year considering; he had 7 goals, 35 points, and 11 powerplay points, and was Seattle's best defenseman all season long. Dunn is going to play on the Kraken's 1st D pair and 1st PP unit and could reach the 40-point mark this season with improvements made to the roster. Fantasy owners can look to draft him in the 13 or 14th round of the draft.

Alexandar Georgiev and Pavel Francouz will split the goaltending duties in net for the Colorado Avalanche this season, who will be expected to be a powerhouse once again. It would be a very wise draft for both goalies and bank on Colorado winning 50+ games so that the Wins can offset their Mediocre categories. If You are in a head-to-head league, you may want to look at other options, but for point leagues, Georgiev and Francouz are the ideal options.