Here are players you should Trade For in Fantasy Hockey: 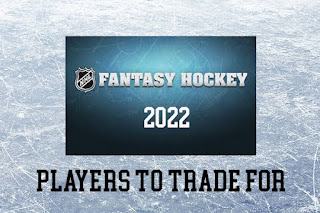 Elias Lindholm has gotten off to a slow start to the season; he only has 2 goals, 2 PPP, 10 SOG, 50 FW, and is a -3 so far this season. He is a player you definitely want to target in a trade, as some impatient managers may be willing to trade away players who don't produce immediately. Of course in order to get a player of Lindholm's caliber, you would need to give up a ton, but it would be worth it at the end of the year.

Teuvo Teraveinen is another player who has gotten off to a slow start to the season; he only has 2 assists, 16 SOG, and is a +5 so far this season. Teravainen doesn't have much value if he isn't racking up assists, which will come in the second half of the season, which is when the points really matter. It would be a smart idea to trade for him while his value is low, using the buy-low strategy.

Jordan Kyrou has had a rough start to the season; he only has 1 goal, 14 SOG, and is a -5 so far this season. It would be a smart idea to trade for him because he plays with Ryan O'Reilly and Brayden Schenn on the St.Louis Blues' first line, so his production will eventually come. Since Kyrou's value isn't as high right now, you might be able to acquire him for very little in return.

Roman Josi has gotten off to a rough start to this season, after a career year last year; he only has 1 point and is a -6, but does have 31 SOG and 13 blocks as well. The good news is that Josi is Roman Josi is getting a lot of Shots, the bad news is that Josi has been held pointless in all but 1 game this season. This may be a good opportunity to try to poach Josi away from inpatient managers.

Last year's Calder Trophy winner, Moritz Seider has gotten off to a rough start to the season; he has 1 point, 1 PPP, 14 SOG, 9 hits, and 12 blocks so far this season. Incredibly, he has an even +/- rating despite playing defense for the Detroit Red Wings, which is remarkable, and his stats in other categories are good but his offensive production hasn't come yet. It would be an excellent opportunity to acquire a defenseman like Moritz Seider while his offensive production is low.

The Vancouver Canucks have been the worst team in the NHL so far this season, hence why Thatcher is 0-5, with a 4.06 GAA and .872 SV%. Despite this, managers should not drop him, but rather take the risk and try to trade for him while other managers are desperate to get rid of him. If you do acquire Demko, it would be best to sit Demko, unless he has a good matchup.