Here are some Overrated Players and players to avoid in Fantasy Hockey this season. 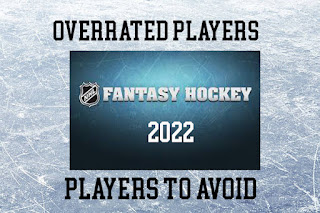 On paper, Jack Eichel is set up to put up some great numbers playing on a line with Mark Stone and Phil Kessel, but he hasn't played in 80 games since his rookie season in Buffalo. You would expect Eichel to put up better numbers playing with more talent in Vegas than he did in Buffalo, but he had some trouble finding chemistry with his linemates last season. Vegas hopes Eichel is fully healthy this season and forms a dynamic duo along with Mark Stone, but it might be wishful thinking because Eichel has lost a step since returning from his neck injury. It is not worth picking him in the 4th round when you can get players such as Elias Lindholm, Evgeny Kuznetsov, Elias Pettersson, John Tavares, and Claude Giroux.

Chris Kreider is overrated in Fantasy hockey because of his production from last season, in which he put up some unreal stats: 52 goals, 35 PPP, 258 SOG, and 141 Hits. I don't expect him to replicate the season he had last year; he may have the same number of SOG and hits, but he won't score as many goals and PPP, for sure. Kreider is ranked 24th overall in fantasy hockey, which is ahead of players like Kyle Connor, Sebastian Aho, David Pastrnak, Jake Guentzel, and Alex DeBrincat.

Brock Boeser is a streaky scorer and despite having scored 20+ goals every season besides the shortened 2019-20 season, is not worth drafting where he is ranked. Boeser is one of those players who despite being a very good player is also a disappointment because he is capable of being a better player than he is. He is ranked 98th overall in fantasy hockey, which is ahead of players like Brayden Point, Jordan Kyrou, Dylan Larkin, Jesper Bratt, and Ryan O'Reilly.

Jakob Chychurun is starting the season on the IR and even if he plays, he doesn't have much fantasy value as long as he plays for the Arizona Coyotes. Owners may take the risk of drafting him, banking on Arizona trading him away to a contender at the Deadline, but is it worth drafting him where he is ranked? Chychurn is ranked higher than defensemen such as Neal Pionk, Tyson Barrie, Jaccob Slavin, Radko Gudas, Dmitry Orlov, and Josh Morrissey.

Tony DeAngelo had a fantastic year with the Carolina Hurricanes last year, putting up 10 goals, 51 points, and 20 PPP with a +20 rating. He will definitely not put up anything remotely close to these numbers with the Philadelphia Flyers, who are going to be one of the worst teams in the league. DeAngelo is ranked ahead of defensemen such as Rasmus Andersson, Noah Hanifin, Jared Spurgeon, Charlie McAvoy, Justin Faulk, and Erik Karlsson.

Ilya Sorokin may be one of the best goalies in the league, but the team in front of him is simply not good enough to compete in a stacked Metropolitan division. Because of this, despite Sorokin himself putting up good personal stats, he will not get enough Wins to validate being picked over the likes of Jacob Markstrom, Juuse Saros, and Thatcher Demko.

Sam Bennett was the beneficiary of playing on the line with Jonathan Huberdeau the past two seasons in Florida. I don't know how well he will do playing without Huberdeau because he rarely produced when he didn't play on his line. Moreover, Bennett is ranked 99th overall, ahead of players like Dylan Larkin, Brayden Point, Bo Horvat, and Ryan O'Reilly, who are a lot more proven.

Jakub Vrana only appeared in 26 games last season, but did pup up 13 goals, 19 points and 6 PPP as a member of the Detroit Red Wings. Vrana is a streaky player and he has been hampered by injuries the past two seasons; this is not a combination for success in fantasy Hockey. I would avoid drafting Vrana, and instead try to draft players such as Valeri Nichushkin, Tyler Toffoli, Brad Marchand, who is on LTIR, and Ryan Johansen.

Alex Tuch only put up 12 goals, 38 points, and 8 PPP, along with 139 SOG in 50 games last season with the Buffalo Sabres, but for some reason, he is ranked quite high in Fantasy Hockey. Currently, he is ranked 138th overall, which is higher than players such as Thomas Chabot, Nick Suzuki, Michael Bunting, Seth Jarvis, Joel Eriksson Ek, and Carter Verhaeghe. The reason why you avoid drafting Alex Tuch is that he hasn't played more than 60 games in the last two seasons and when he only had one 20-goal campaign in his career.

Ivan Provorov is a very good defenseman in real life but he doesn't have much value in fantasy because he doesn't get high offensive totals and because the Flyers will be bad this season, he will also have a terrible +/-. Avoid drafting Ivan Provorov at all costs, because there are way better options like K'Andre Miller, Neal Pionk, Tyson Barrie, Jaccob Slavin, Radko Gudas, Dmitry Orlov, and Josh Morrissey. Unless you are in a deep league with deep rosters, I would avoid drafting Provorov.

Seth Jones and the Chicago Blackhawks are going to be in for a long season, as Chicago has one of the worst teams on paper in a tough Central division. Jones may get a good amount of points while the team still has Patrick Kane, after he gets Traded, his offensive numbers will dip significantly and he will have a horrible +/-. I would avoid drafting Seth Jones because there are better defensemen available ranked after him like Rasmus Andersson, Noah Hanifin, Jared Spurgeon, Charlie McAvoy, Justin Faulk, and Mikhail Sergachev.

Spencer Knight may have a bright future as the goaltender of the Florida Panthers, but as long as they have a healthy Sergei Bobrovsky, he will not get the reigns as the true number 1 goalie. Because of this, you should avoid picking him in Fantasy, as there are better goalies available ranked after him such as Jack Campbell, Jordan Binnigton, Alexander Georgiev, and Pavel Francouz. Unless you are in a dynasty/keeper league, I would avoid drafting Spencer Knight.