Here are some Goalies to Drop in Fantasy Hockey: 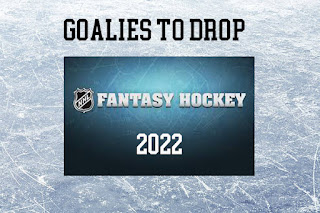 Thatcher Demko was having a terrible season before getting injured and being placed on IR, putting up a 3-10 with a 3.93 GAA and .883 SV% this season. He is still owned in 66% of Fantasy Leagues and should be dropped in one-year leagues because the Canucks are not going to be good this season, especially if they trade Bo Horvat. Demko is only worth holding in keeper leagues but only if you are desperate for goalies.

Jack Campbell has not lived up to expectations in Edmonton and as a result, recorded a 7-6 record with a 4.12 GAA and .872 SV%. He has lost his starting job to Stuart Skinner, who has outplayed him and Campbell has only had 1 start in the last two weeks. Campbell is owned in 61% of Fantasy leagues, but if he continues to play like he has at the beginning of the season, that percentage will be lower.

Jonathan Quick has really struggled recently mostly due to the poorly in front of him, but he 2-4 record with a 4.54 GAA and .853 SV%. Although he isn't going to lose his starting job anytime soon, he is borderline unplayable at this point in time, so you are better off seeking other options on the waiver wire. Quick is owned in 65% and I expect that number to drop drastically if they keep on giving up 4 or 5 goals a game.

John Gibson is having a terrible season mostly due to playing behind a terrible Anaheim Ducks team, he has a 5-13 record, a 3.99 GAA, and a .894 SV%. Amazingly, Gibson is still owned in 40% because at this point, it is clear that Anaheim is a terrible team, and having Gibson would hurt your team more than it would help. He is not worth owning anymore in Fantasy at this point.

Antti Raanta is not even getting playing time anymore, with Pyotr Kochetkov having started 6 straight games in a row. Raanta has a 4-2 record with a 2.62 GAA and .894 SV% and is owned in 28% of fantasy leagues now. Raanta is not worth owning unless you are in a deep league with large rosters.

Alex Nedeljkovic is not even getting playing time anymore, with Ville Husso having started the majority of the games. Nedeljkovic has a 2-4 record with a 4.09 GAA and a .880 SV% and is owned in 16% of fantasy leagues now. He is not worth owning in Fantasy anymore.