Here are some Centers you should drop: 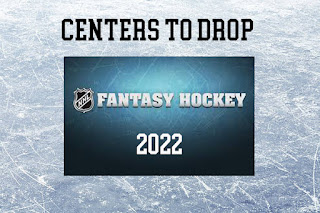 Ryan O'Reilly is having a dreadful season so far, putting up just 9 goals, 15 points, 2 PPP, along with 315 Faceoff wins and is a -26. The only value O'Reilly has now is faceoff wins and with his +/- being so bad, it almost offsets how good his Faceoff wins is.You would be better off finding other players that can fill up the faceoff win category.

Kevin Hayes started off the season fairly well, but in the last month of the season, he only has 3 goals, 8 points, 4 PPP, 35 FW, 37 SOG, and is a -4. He has also been dropped in the lineup to play on the wing along with Scott Laughton and Wade Allison, which will be a massive hit to his fantasy value because he won't be taking as many faceoffs as before.

Ryan Strome is having a horrid start to the season, with only 8 goals, 14 assists, 2 PPP, 57 SOG, and 241 Faceoff wins so far this season. Strome doesn't stand out in any particular category and struggles to produce on a bad Anaheim Ducks team. There are much better options for the waiver wire than Ryan Strome right now.

Ryan Hartman had a breakthrough season last year centering Kirill Kaprizov, but this season, he had a slow start and has since been demoted to play on the second line. Not only is he not playing with Kaprizov, but he is also playing wing on the second line, and because he is only eligible to play Center this year, he does not have fantasy value, as long as he doesn't contribute in other categories and last season, his positional versatility was a huge bonus as well.

Shane Wright simply should not be rostered in any fantasy team right now unless your league has NA spots or you play in a dynasty league. Wright is owned in 5% of fantasy leagues and I don't expect him to play for the Seattle Kraken team until the final month of the season. If you are in a single-year league, I would cut bait with Shane Wright.

Sean Kuraly has been one of the better Columbus Blue Jackets this season, but he is still not worth owning in fantasy due to his poor +/-. Kuraly has 7 goals, 3 assists, 255 Faceoff wins, 84 hits, 25 blocks and is a -14. Although he has solid stats in the Faceoff wins, hits, and blocks categories, he is a non-factor an the scoring categories.