Here are some players you should drop in Fantasy Hockey: 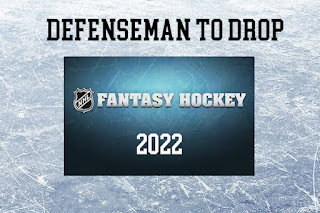 Although Seth Jones is having a solid year, he is playing on the worst teams in the league, which has resulted in him getting the worst +/- in the league. Jones has 1 Goal, 8 assists, and 5 PPP but is a -21, which in some leagues may be bad enough to offset his offensive production. I don't see Seth Jones turning it around this season, so you should consider dropping Seth Jones if you still have him on your team.

John Klingberg has decent offensive production, with 4 goals, 7 assists, and 3 PPP but is a -15 because he plays for a terrible Anaheim Ducks team. Unless Klingberg is traded to a contender, I don't see him having significant fantasy contributions, and you can definitely find a better replacement on the waiver wire than him.

Cam Fowler is having a decent season so far this season, with 4 goals, 12 assists, and 7 PPP but is a -9 because he plays for a bad Anaheim Ducks team. It seems like every season, Fowler has stretches in which will be really good, but on the other hand, he has stretches where he can go pointless. Fowler is owned in 15% of Fantasy leagues, and that percentage should drop if and when he goes on a scoring drought.

Colton Parayko has continuously been a disappointment in fantasy, and this season has arguably been the most disappointing start to the season that he has had. Parayko had 1 goal, 7 assists, 1 PPP, and is a -6, along with 57 SOG, 51 hits, and 51 blocks; he has value in CAT leagues, but not in standard leagues. Parayko is owned in 12% of Fantasy Leagues, and I could see more owners dropping him if St.Louis continues to struggle.

Calen Addison has been a revelation on the Man advantage for the Minnesota Wild, with 2 goals, 13 assists, and 11 PPP but is a -9 and doesn't provide value in other categories other than assists and PPP. Addison has been playing less lately and has been strictly used as a PP specialist, so unless you are in desperate need of PPP, I would suggest finding a different defenseman. Addison is owned in 11% and I can see him getting dropped more if his playing time continues to decrease.

Sam Girard is a player who has been a massive disappointment for two straight years in fantasy; many owners gave him the benefit of doubt that he was injured last season, but not anymore. Girard is having another dud year, recording 1 goal, 4 assists, 2 PPP, and is a -8; at this point, just cut your losses and find another player to replace him because he isn't helping at all. Girard is only owned in 10% of leagues and I could see that percentage dropping if he continues to record zeros across the board.