How Seattle Kraken Can Turn into a Contender by Draft 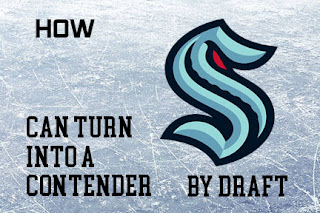 The Kraken are able to restock their farm system with some high-end talent, who could contribute a few years down the road.

At the 2023 Trade Deadline, two trades are made

Seattle Kraken trade Joonas Donskoi to the Boston Bruins for Trent Frederic, Oskar Steen, and a 2023 3rd round pick.

The Kraken get two solid young players and a draft pick in exchange for a pending UFA, not a bad haul.

Carson Soucy, Karson Kuhlman are traded to the Buffalo Sabres for Matej Pekar, Jacob Bryson, and a 2024 6th round pick.

Seattle get two solid young prospects in Jacob Bryson and Matej Pekar, as well as a draft pick for Carson Soucy and Karson Kuhlman.

The Seattle Kraken finish the 2022-23 season, with 4th worst record in the league, however, they luck into landing the number 1 pick.

Before the 2023 draft, two trades are made

Seattle trade away Chris Driedger and Ryan Donato so Daccord can take the reigns as backup and to free up some cap room.

Alexander Wennberg is traded to the Philadelphia Flyers for a 2024 3rd round pick.

Seattle Kraken draft a couple prolific offensive players, which will make them a pain to play against in the future.

By the 2023-24 season, the Seattle Kraken have assembled a team that looks like it could contend

With this lineup and the prosepcts that Seattle has in the pipeline, the Kraken would be able to be contenders for a long time.