How Arizona Coyotes can turn into a Contender by Draft 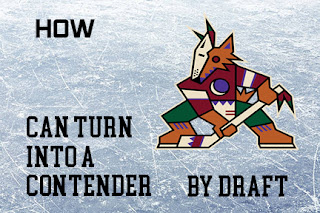 Before the 2022 Draft, two trades are made

Arizona Coyotes trade Phil Kessel, Anton Stralman to the Minnesota Wild for Nick Bjugstad, 2022 4th round pick. If Phil Kessel re-signs with Minnesota, the Coyotes get an additional 2024 3rd round pick.

The Coyotes Get something in return for Phil Kessel and Anton Stralman, rather than lose him for nothing.

The Panthers as they get that top pair defenseman they have been searching for, while Arizona get three very good players and a 1st round pick.

In the 2022 Draft, the Arizona Coyotes added a total of 12 prospects, who could be a big part of the future.

At the 2023 Trade Deadline, one trades is made

Arizona Coyotes trade Shayne Gostisbehere, Nick Ritchie to the Carolina Hurricanes for Dominik Bokk and a 2023 2nd round pick.

The Hurricanes build up the depth with the additions of Gostisbehere and Ritchie, while the Coyotes get Dominik Bokk and a 2nd round pick.

Before the 2023 Draft, two trades are made

Arizona Coyotes trade Nick Schmaltz to the Columbus Blue Jackets for 2023 2nd round pick and a 2024 1st round pick.

Arizona Coyotes acquire Mikail Sergachev from the Tampa Bay Lightning for a 2023 2nd round pick, 2024 1st, 2nd round picks, plus Artyom Duda and Miko Matikka.

The Coyotes get their top-pair defenseman in exchange for Arytom Duda, Miko Matikka and 3 draft picks

The Coyotes add some high-end prospects in the 2023 Draft, which could propel them into contention very soon.

The Arizona Coyotes miss the playoffs again in the 2023-24 season, and end up with the 9th pick in the draft.

The Arizona Coyotes add to their already loaded farm system, and have set themselves up very well for the future

The Coyotes acquire their goalie of the future in Yaroslav Askarov, while the Predators get a two very good prospects in Jesse Nurmi and Ryan Greene, Ivan Prosvetov, and a 1st round pick.

Lawson Crouse, Ilya Mikheyev and Jack McBain are now expendable with the new talent coming into the team.

Barrett Hayton, Artem Zub is traded to the Ottawa Senators for Lassi Thomson.

Ottawa Senators get Lassi Thomson to round out the defense, while the Senators get Barrett Hayton, who could immediately become their 2nd line center.

By the 2025-26 season, the Arizona Coyotes have put together a powerhouse team

The Arizona Coyotes now have a powerhouse team that has the potential to be a dynasty.